skip to main | skip to sidebar

Navami.sreekumar
I am HIS little angel here for a greater cause.I am running this blog to hone my writing skill and widen my thoughts. I am very true to the title"The Mirror Image of my thoughts". 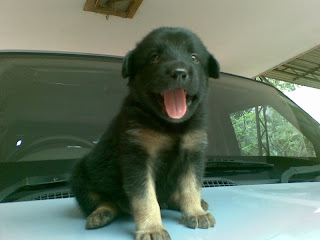 My grandma named him 'johny'. Stupid name right? I know. I tried my best to change his name but it was in vain as my grandma is stern with stuffs like me..after all she is my grandma right....


Anyway, i named him JUHATTI. My sweet little doggy. I told grandma that 'johnykuttan' when said in Hindi is JUHATTI. I saw her struggling to hide her laughter.She knows pretty well that i be fooled her as i am always blunt to people.

I was with my doggy only for four days. But, within these four days, he taught me manythings. well, lemme share some of them with you...

The first thing that i noticed in him is Naturality. He is the same with everyone and is quite natural.He doesnt want to create a good image about him as we do many a times when situation demands. He is happy for what he is. .Because of is this quality he could capture my heart.He has no inhibitions..stress or tension.

If you guys dont know the meaning of the word Loyalty ,i tell you,your petdog can teach you better than anyone else.Juhatti is the embodiment of loyalty. I shouted at him,screamed at him,ignored him(when he irritates me to the core)and what not...but, he is the same to me...Loyal to his master!

And finally Love. It is from him that i realized that love has no boundary. Creed,age,species nothing is a bar as love is a universal truth that rules the world! I am a homosapien and he is from the animal kingdom.Still, he loves me and tells me his problems and discomforts..

I think it is better to love animals as they never hurt us! Love you..JUHATTI!
Posted by Navami.sreekumar at 7:30 AM